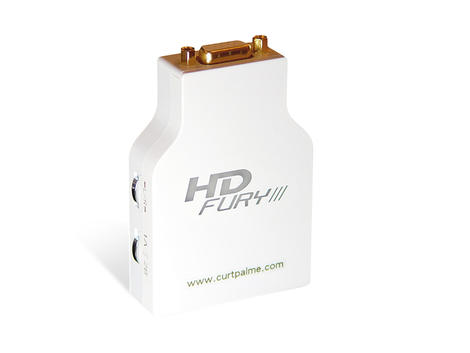 The HDFury3 is a clever piece of kit that allows you to get around the limitation of recording HDMI HDCP protected content from your PS3 or Blu-ray player to an analogue recording device that doesn't have a HDMI input, but uses HD component inputs. It also allows you to connect devices that use HDMI to legacy kit, such as computer monitors or VHS players that weren't around when HDMI was invented. At £190, however, it's not cheap, so is it worth the outlay? The size of a cigarette packet, the convertor has two HDMI v1.3 inputs and conventional analogue component outputs, with power supplied by a separate mains adaptor.

This entry was posted in HDMI. Bookmark the permalink.